about
🔍
browse all music
random pick

I'm a singer, songwriter, multi-instrumentalist, producer, and recording engineer. I made this site to share what I do with you. You might have heard me play at the Skunk Hollow Tavern open mic on Wednesday nights in Hartland Four Corners, VT, where I've been playing since April 2011. Here's a playlist of songs I've played at the open mic. I've got a home recording studio and I've set up the gear at several locations for live recordings of jams with various combinations of a small group of my life-long friends. There are hundreds and hundreds of recordings here of songs I improvised or crafted, alone or with some friends, going all the way back to 1979. Sometimes I write a little story highlighting one of my favorite recordings, called the pick of the week. They're a great way to browse the music here and get an idea of what I've been up to for the past 40 years, and there are usually a few pictures. There's one 'pick of the week', selected randomly, below. Playback controls are above.

mangobananas random pick:
'your truck' by The Andy Band

As I've written about before (see "dreaming dog", "want need give", and "octal optics"), I spent three weeks house-sitting and pet-sitting for my son and daughter-in-law in 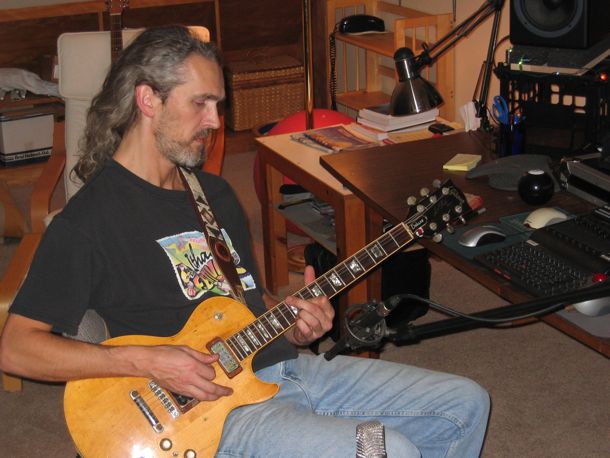 December 2007 at their house here in Brownsville, VT, and I set up mangobananas studio in the top floor of their house. (Barbara and I didn't move a few miles away from them until 2010.) Every night for the first two weeks, I'd start with a recording of a completely fresh improvisation, then move on to a more produced, multi-tracked recording. This one was extracted from an improv near the end of the second week --it was the night of Thursday, 20 December 2007. That improv was so long and rambling, I snipped out this piece that felt like a self-contained little love song.

The backstory to these improvised lyrics is that Barbara had been having trouble with her 2001 Isuzu Trooper's transmission. I think it might have been replaced once and was acting up again, slipping when going up hills. I'd been basically dropped off in Vermont, and drove my son's pickup truck if I needed to leave the house for something. She was going to come and get me from Vermont, after staying with me for a week there around the holidays. So I was worried about her truck when she's was coming to get me. 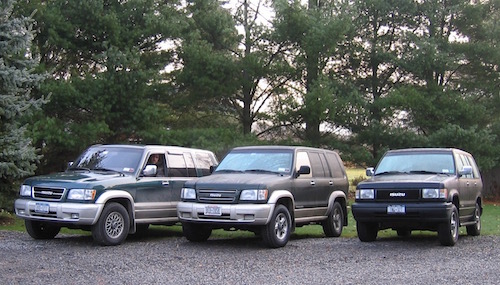 I thought of this song this morning as I called AAA to have my 1999 Isuzu Trooper towed to the repair shop because the accelerator pedal stopped doing anything. Barbara's still driving the 2001 Trooper, but I'm not sure my '99 is going to pass inspection this month due to all the rust. Isuzu stopped making Troopers (in N.A.) after 2002, so we don't know what we're going to drive next! We've been driving Isuzu's since 1990, when I got my bright red 1985 2-door. Next was the sweet, new, jet-black 1993 model (the new body style), that even made a trip to Mississippi. Then we replaced the '85 in '96 with a 4-door, maroon '91 that was Eric's rig in high school and college --complete with a Steve Best-installed killer stereo with massive 'dog house' in the back! We got the 2001 in December 2001 with 9000 miles on it, and the 1999 in 2004. The '99 and '01 are our "matching rigs". Those five trucks have hauled a ton of hockey bags and loads of all sorts of gear all over New York State, the Saint Lawrence Seaway, and on to Connecticut and Vermont over the years. They've been so dependable in all kinds of inclement weather, and just never let us down. Of course, all our Troopers had 4-wheel drive. I was surprised when I found out they made 2WD versions! 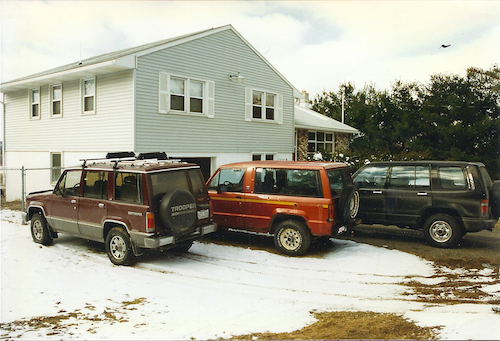 Recording notes: I had just put new strings on my 1976 Les Paul Deluxe, and I plugged it in direct through my audio interface into my Mac, running Logic Pro, and added some Guitar Amp Pro setting to dirty it up a bit. But I also recorded my standard acoustic guitar microphones: a small-condenser mic up close (Earthworks SR77) and a large-condenser mic a couple of feet away (Røde NT1-A). I mixed all three of those signals to get a really interesting guitar tone that really captures the bright tone of the maple top of that sweet old Les Paul, and the mics picked up my improvised vocals pretty well, too. This was cut from the longer improvisation "VTi15 vodka tonic", and it on the album snowcats and sundogs.